I was able to spend some time with NAIOMT Co-founder Cliff Fowler, PT, MCSP, MCPA, FCAMPT recently at the NAIOMT SI Joint Symposium in Seattle. Cliff has been an OMPT for a long time, and is supposedly retired from work. But, I don’t believe that you ever retire from your passion, and I am so glad to see it. He is still thinking and innovating and teaching. And he started me and others on the same path.

Cliff was my very first OMPT instructor when I was a year out of school in 1994. I fell in love with Cliff’s dry English humor and OMPT. In class he even said he had a test to tell whether someone would be a good manual therapist. I volunteered for the test, which ended up being a joke, but the start of my passion for OMPT was not.

In his presentation at the NAIOMT SI Joint Symposium, Cliff spoke of how, in the name of research, he let someone hammer a nail into the base of his sacrum to measure movement during the kinetic tests they were doing. I call that donating your body to science. But research is when you want to know the answer to something, so you test it. 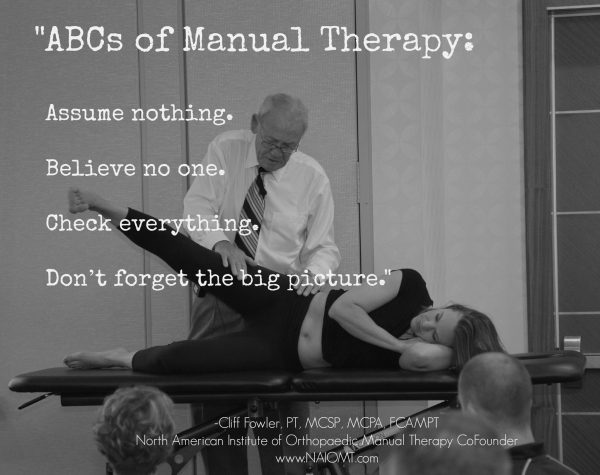 And, while listening to him talk during the presentation, I could almost actually see the gears in his head turning over new ideas as he was moving the model. It was so encouraging to observe because I find myself doing this. I have noticed that with some of my patients I am more creative than with others. Something about the patient can stimulate innovation.

But, my favorite moment was when I observed how he stimulates people to think. We were sitting with a small group of 3 to 4 NAIOMT clinical fellowship instructors and he asked a simple question, “When I test someone’s elbow flexion and find weakness, what is that?” Immediately, the group started explaining different possibilities and theories. After realizing the simplicity of what he had just done to stimulate discussion, I looked over at him sitting there quietly with a happy smile on his face. This was exactly what he was going for. And all he did was ask a question.

Thank you Cliff, and everyone who takes the time to teach, particularly the skills to think and reason. Patients are complex and need therapists who can reason their way through relevant evaluation and treatment and be able to interpret the results. And thank you for innovating, because without innovation we wouldn’t get better than we are. But, I say, “Don’t stop now.” In his book Imagineering, Michael LeBoeuf mentions that in a study of approximately one thousand creative achievements the median age of the creators was seventy-four at the time of the creative achievement. So, Cliff, you have barely begun and we still need you.