Don’t you love being a PT? Who else cares that a blocked, silent culprit of a joint can lead to consequential injury up or down the chain of the homosapien? Or that a hypermobile joint is distorting my sympathetic nervous system, making me most vulnerable to injury? Who else has that training? We as PTs live for the end feel! Takes “sweat equity” to master for sure. But how rewarding. It is exclusively our science, yes? Pathokinesiology. I want to share this real- life case scenario with you. Here we go!

Imagine a 15 year old female elite volleyball and basketball player (let’s call her “Jumpin Josey” or “JJ” to minimize the use of the word “She”) in a small division high school. JJ suffers a significant inversion ankle injury in 2015 in volleyball practice. She is seen in urgent care that evening, placed on crutches, and given RICE protocol. Over the next number of weeks, JJ has “full recovery” without benefit of physical therapy and enters the basketball season.

During this season, the subsequent summer league and the following volleyball season, she competes without further injury. JJ is screened by a certified NAIOMT PT in an ACL Prevention Screen for the team prior to the upcoming basketball season. She complains of never feeling she could fully squat on her injured ankle since her injury, noting minimal symptoms other than a “blocked sensation” to achieve full squat. The PT notes a distinct difference in single leg barrier jumping and jump down landings, recording more limited squat excursion and excess valgus knee respectively on the affected side. 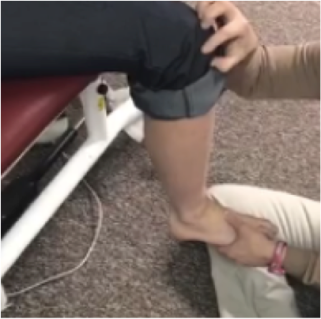 If you’re familiar with the Talar Swing Test as taught in our lower extremity course, and I were tell you the test is “positive” or revealing, what would be your clinical reasoning and intuition?

Rather than share the eventual diagnosis with you straight away, let’s have some fun! I wonder if you might first discuss with a colleague just this presentation without further information and see if they go where you are going in the differential diagnoses, or not.

How would you reason a limited squat on the injured side related to this test? Why is there excess valgus of the knee? And further, so what? After all, she has continued play and remains one of the top players on each team. Comment below if you have thoughts or questions and to connect on these issues and more in person, join me in Washington for the following manual therapy courses that will help take your skills to the next level:

Steve Allen is a graduate of the University of Southern California 1977 with a MS in Physical Therapy. Internships included attending the Kaiser Vallejo Rehab Program with Margaret Knott and Greg Johnson for intense instruction in Proprioceptive Neuromuscular Facilitation. Steve is the founder of Evergreen Physical Therapy in Spokane and currently serves as Clinic Director at Therapeutic Associates, Inc. in Liberty Lake, Washington. Steve received his Board Certification in Orthopedic Physical Therapy in 1986 and is a 1996 graduate of the North American Institute of Orthopaedic Manipulative Therapy (NAIOMT) and currently serves on the board of directors for NAIOMT. Steve received his Fellow in the American Academy of Orthopaedic Manipulative Therapy in 1998.